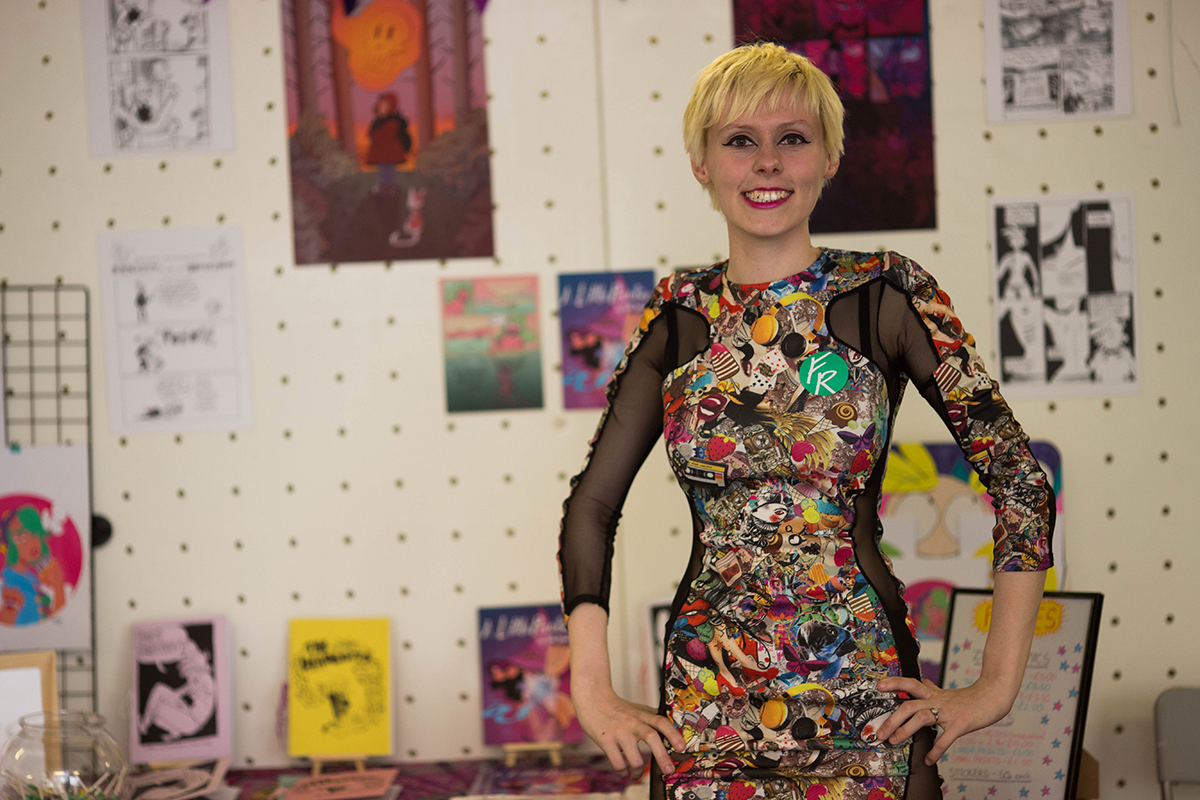 Illustration students from a north east art and design college have wowed industry professionals and visitors alike at a three-day exhibition in London’s Brick Lane for their degree show.

Final year students from Cleveland College of Art and Design (CCAD), took their Degree Show, titled’ Due North’ to the hugely popular Free Range event at the Old Truman Brewery, an arts and media quarter on Brick Lane in East London.

The Due North exhibition, a vibrant and eclectic degree show, took place over a weekend, and at a private viewing on Friday evening, attracted over 100 industry professionals, including art directors, illustration agents and publishers, who have since expressed interest in the students’ art. During the weekend, over 1,000 visitors were able to view the creative talents of the students and buy their work.

The Degree show was supported by a further 35 first and second year Illustration students, who exhibited and sold work throughout the event which took over near 8000 square feet.

On Saturday and Sunday, Due North hosted talks and a live drawing session from some of the UK’s leading illustrators. Chris Riddell, Children’s Laureate, author and illustrator was on hand to provide live drawings for the students and public, and pass on his experience to the graduating students. A visiting fellow at CCAD, Chris produced a special illustration for the students, in which he said: “Meeting lots of brilliant students from Cleveland College of Art and Design, Hartlepool in Brick Lane at their London exhibition. A joyful afternoon of drawing.”

Artists Dan Mumford and Tom J Newell visited the event to talk to the students about their work during university and show some of the more experimental art they created before graduating.

Dan said: “We wanted to show that we didn’t leave with these fully formed identities and styles, and that university can be a great time for experimenting. The show was fantastic to see. Having been in Hartlepool a couple of times before to see the students work and talk with them, it was really nice to see how much progress they have all made in the past couple of years. It’s still a young course, so it was really nice to see this first graduating year, there’s so much great talent.”

Two students who made a great impression were 22-year-old Mike Louden from Billingham in Stockton-on-Tees and Alice Barron, 22, from Gateshead.

Both students caught the interest of Mister Mistry, a custom airbrush artist who runs a business in London, and were interviewed about their designs.

Mike, whose designs are influenced by patterns based on sports, created a range of products and a colouring book. He said: “I took part in a video interview with Mister Mistry about me and my work, and I am now following up to see if I can get involved in a group exhibition he is looking to set up.

“Along with additional interest in my work, it was a really good weekend. I particularly enjoyed watching people look at my work, and colour in my colouring wall, especially well known artists like

Dan Mumford, Tom J Newell and Chris Riddell. It was a really good experience of watching the London public admire my work.”
Mike is keen to move to London to pursue his career, and has started working as a freelance artist. He is initially concentrating on developing his portfolio but is also planning to get involved in exhibitions, fairs and online stores.

Matti Walker, 23 from Norton in Stockton-on-Tees, featured his illustrations in a campaign using leaflets and adoption packages to raise awareness of African animals facing threats through game hunting, reduction in habitats and disease. He said: “Brick Lane was very busy and full of interesting people; a lot of which came to the show and had a look round, and it was good to be able to talk to people from different walks of life.

“I had quite a bit of feedback on my work; plenty of people that came around were really impressed, which was nice to see but a lot of our visitors were from the illustration side too, so now I have several links to industry and they’re all interested in my artwork. I feel that the exhibition has been quite beneficial to me and it was an amazing place to have my degree show, the location was perfect.”

23-year-old Claire Bartlett from West View in Hartlepool created two fully illustrated books based on anxiety and depression aimed at secondary schools. She said: “I enjoyed the feeling of having my artwork out in the ‘real world’, and also seeing members of the public and people from industry appreciate it.

“A lot of people were asking to buy my work so they took my contact details and I have created a new website and online store where people are able to order prints. Overall it was a great weekend and experience and I got really good feedback from everyone I spoke to. I had a chat with Chris Riddell, the Children’s Laureate about how my work could be applied to a younger audience if I wanted to take that route.”

Student Beth Wood, 22, from Redcar but now living in Cramlington in Northumberland, is a comic illustrator and artist who produced a range of quirky and colourful comics, cartoons and artwork influenced by politics, mental health and feminism for her display.

She said: “I was really excited to be in London as it was a great opportunity for us, and close to the industry. I have developed some contacts with publishers and I am currently working on a comic project, as well as selling my work online and at conventions alongside working as a freelance artist on commissions. The degree at CCAD and this event has really helped me get into the work mind set.”

Second year student Silas Field, 19, from Grangefield in Stockton-on-Tees, created a 5ft mural for the event, in the public outside space of Brick Lane, at the special request of Free Range. The live wall drawing took place in the hub of the crowds, which Silas enjoyed.

He said: “Free Range had looked at my Instagram and got in touch to see if I was interested in drawing the mural. I took my inspiration for the wall drawing from the work I had already produced, based on films such as John Carpenter’s The Thing and Ridley Scott’s Alien, as well as the works of Ralph Steadman and surrealism.

“It was great to have free rein at Free Range and working on the mural was very relaxing and easy, and was pleased that it didn’t rain!”

Ben Clowes, Programme Leader, BA (Hons) Illustration for Commercial Application, said: “This Industry Degree Night at Free Range was a great success. We had 8,500 ft of space at the exhibition and the students did an amazing job of filling it. We have also had some strong interest from industry, which is really exciting, and I think our students will be picking up some freelance work and commissions very soon.”

Pat Chapman, Head of Employability and External Relations, said: “All of our degree courses have strong links with the creative sector allowing students to understand the marketplace they will be working in and develop vital contacts. Due North and other exhibition opportunities we offer students provides another link in this chain, showcasing their work to industry and creating opportunities for graduate to gain paid work straight from college. We always look outward for opportunities to exhibit and allow students to sell work and designs – our Textile students recently back from a successful show in New York are about to exhibit at New Designers in London for example.”