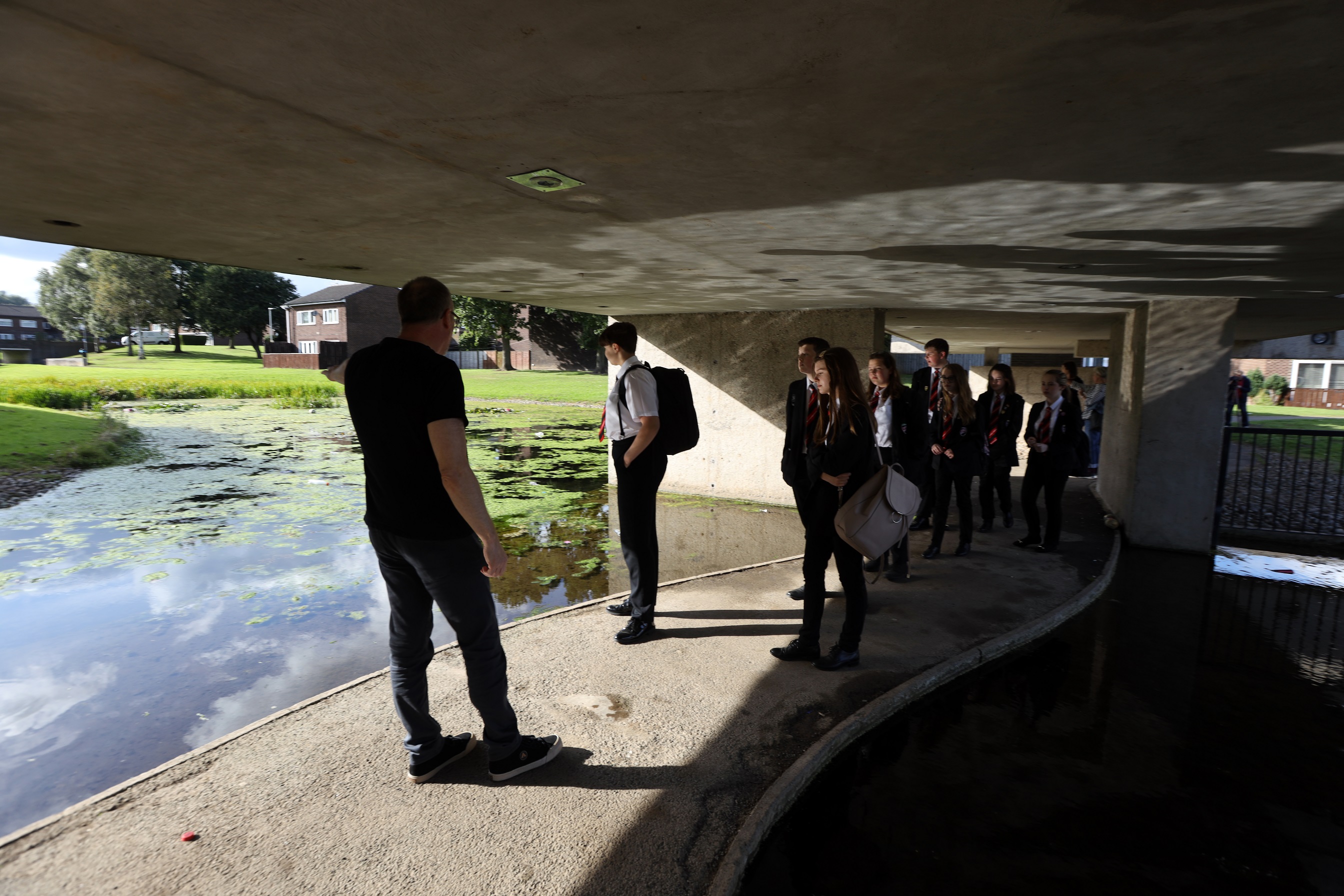 Schoolchildren have been visiting a unique County Durham landmark for an art project, as part of its 50th anniversary celebrations.

Students from The Academy at Shotton Hall at Peterlee were at the town’s Apollo Pavilion, for Playful Places, which is part of a year of events organised by Durham County Council to mark five decades since the structure was unveiled.

And local residents are being reminded they will have the chance, later this week, to see it temporarily transformed courtesy of an installation by county artist Steve Messam.

The concrete pavilion, an example of brutalist architecture designed by artist Victor Pasmore, was unveiled on the town’s Sunny Blunts estate in 1969, with its name chosen in honour of that year’s Apollo moon landings.

The council chose to mark five decades of the structure with a calendar of celebrations, which also form part of #Durham19 – a year of events and activities to celebrate everything the county has to offer in cultural and sporting terms.

As part of the year of activities, students from Shotton Hall visited the pavilion with the council’s community arts team to gain inspiration for Playful Places.

The project is seeing the students, and those from Dene Community School, also at Peterlee, taking part in workshops led by Steve Messam and fellow artist Sara Cooper, in which they will be designing and creating their own artworks. Their drawings, collages and models will ultimately go on show for a time at locations around the town.

And from Thursday 19 to Sunday 22 September, local residents will have the chance to see the pavilion host ‘Apollo,’ in which it will be encased by four inflated sculptural forms, illuminated from within.

The installation is the brainchild of Steve, whose Hush sculpture near Bowlees Visitor Centre in the North Pennines Area of Outstanding Natural Beauty, has been widely acclaimed.

Apollo will be open to the public to view from 10am to 9pm daily.

Cllr Joy Allen, the council’s Cabinet member for transformation, culture and tourism, said: “It’s brilliant that we are able to involve young people in the celebrations of half a century of the pavilion and our year of culture. The opportunity for schoolchildren to work with artists like Steve can only be beneficial and the fact their creations will be going on public display must be really exciting.

“Equally we’re massively excited at the prospect of Steve’s Apollo installation. It’s not often people get the chance to see world class art on their doorstep and we really hope local residents will come along and enjoy it.”

The year of celebrations has been funded variously by Arts Council England, the county council and its East Durham Area Action Partnership, and East Durham Creates.